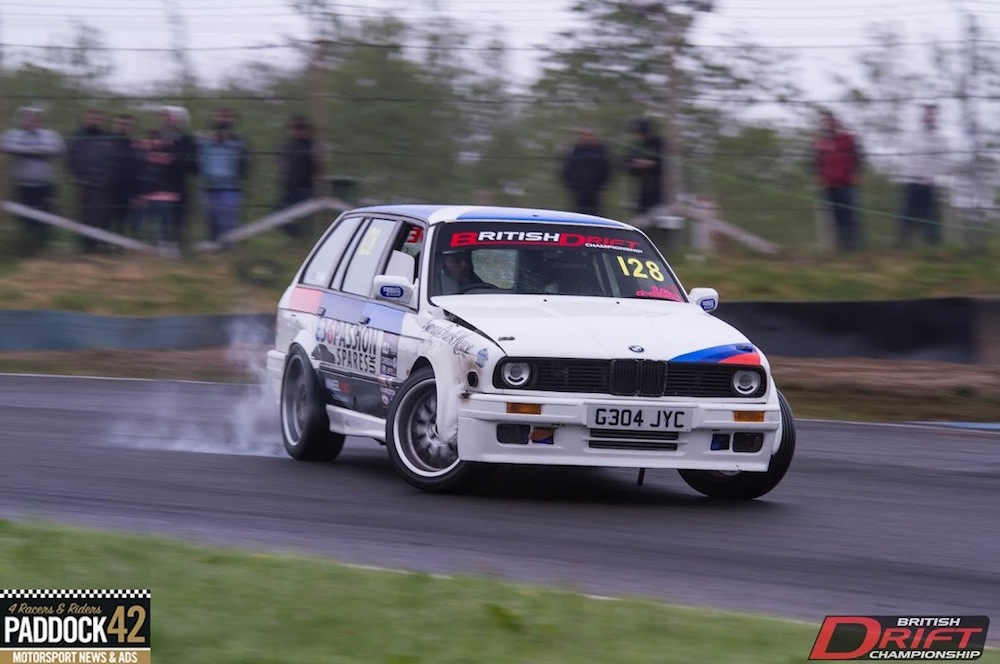 BDC Round 2 Knockhill…Over The Hill

The British Drift Championship Round 2 was held at Knockhill Racing Circuit last weekend (13th/14th of June), and again in the new format of Pro-AM On Saturday Followed by Pro on Sunday. Results and huge gallery and film footage below….

Pro-AM Are basically the feeder class into pro, but in no way are drivers any less skilled or capable. On The Saturday morning I took my place on the start line and got a few shots of the cars before departure of ‘The Hill’, and to see the smiles on drivers faces was a warming thing. The Pro-AM Class made the most of their practice sessions as this is a challenging track, proven by the fact many drivers met the gravel trap and the grass as happens every year when the BDC circus heads north of the border.

In qualifying and Pro-AM, the rain came just in time which made a ‘quali’ run a completely different thing to achieve, with little to no grip it was russian roulette with tyre pressures. Your top 3 qualifiers were;

The Pro-AM Battles were good to watch and you could notice the drivers who were able to adapt their style to suit the sketchy conditions. Action and drama unfolded including Adam Simmons and Scott Cartledge coming together on the first corner…

The Results from Round 2 of Pro-AM are;

I arrived back at Knockhill on the Sunday and conditions were best described as gloomy and damp, again I spent my morning on the start line. There were two new machines that made their debut on the Sunday in the form of Team Lassa Tyres Nissan Skyline R35 GTR, piloted by Simon Perry who was still having ‘bits’ done to the car on the Saturday morning. I caught up with Mr Perry on the line,  ” The car is a completely different animal to my R33 Skyline” (Si’s previous comp car), the 35 is so much more responsive, even in the wet!”

Practice in the wet was a mixed thing again for drivers with even some top names ending up in the gravel on the first corner, with drivers describing conditions as like driving on ice.

The Pro qualifying sessions I found myself on the inside of Seat Curves, a perfect place to capture drivers entering onto an outside clip then onto an inside clip, its fair to say some awesome angles were put out there, one of my favourites was performed by Irish Driver Gary Dunne in his Team Boss Nissan S13 sporting a TDP lock kit and as you can see here he uses it well.

One driver I did feel for was ‘Its a DRIFTLIFE’s’ Christian Lewis who turned up on the Sunday morning to qualify but on his first run he damaged his diff and gearbox and that was the end of his weekend.

Your top 3 Qualifiers were;

From the first battle you could tell that the Pro drivers were out for blood, two names that are always guaranteed to be in the thick of it were Marc Huxley in his RA28 Celica sporting a Nissan SR20 engine against Dan Firmager in his 1UZ Powered Volvo 340. Huxley followed Firmager in and ended up ruining the front end of his Celica and bending the 340’s Door, but this is Drifting and the battle ended up being postponed until both drivers were ready to go again.

Spectators enjoyed every battle leaving judges with hard decisions to make but in the end it boiled down to these 3 drivers stepping up onto the podium.

Take a look at the gallery from the weekend:

You can re-watch the action at http://www.bdcdrift.com and also live stream every remaining round of this year.

Thanks for taking your time to read and please feel free to share.

Read More From Shaun
Previous Next