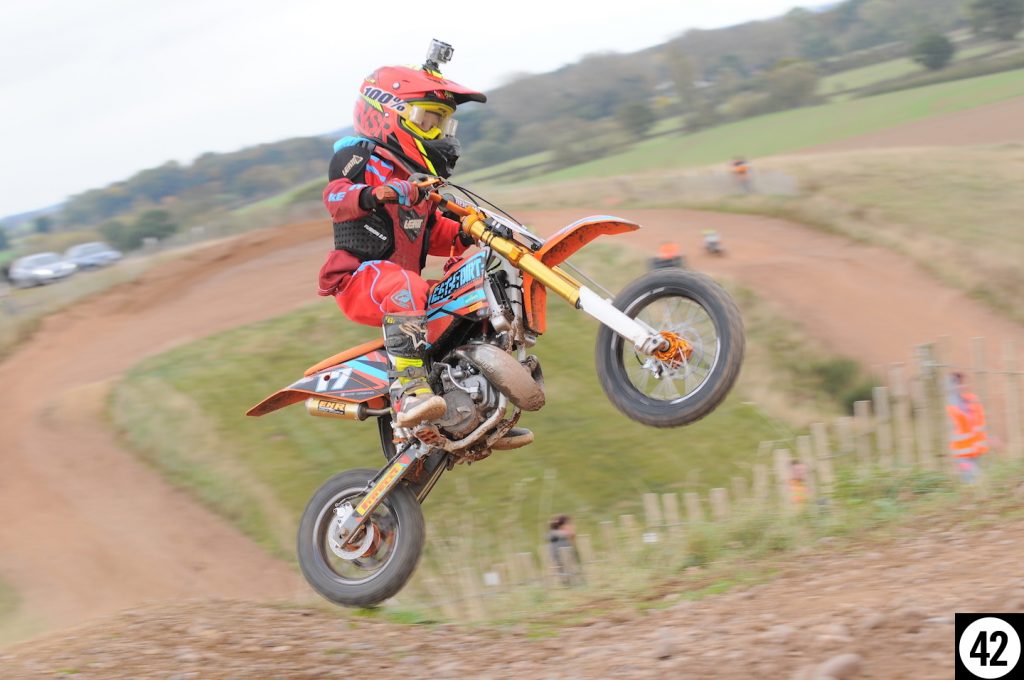 Motocross at Polesworth…Wilden MXC Round 4

A field full of talent in the autos set the scene for some fantastic racing with the BW auto class win going down the final race of the day with anyone of three riders capable of winning. The 85cc class was looking in great shape too with Ben Kennedy coming over from Ireland once again. However, round 4 wouldn’t be as clean cut for the talented Suzuki rider as a returning Ben Harrison was looking to add to his impressive championship points haul.

The SW Auto riders kicked off the programme with their first race. Finley Nials made his intentions clear from the start dominating the opening bout ahead of Jensen Severn and Zane Sibly-Deakin respectively. Race two saw Kyle Hancox enter the challenge for the overall bagging the second race win ahead of Nials in second. Heading into the final race it was all to play for with just a couple of points splitting the lead pair. Despite coming on strong for the second half of the day, a poor race one result saw Hancox settle for second. Conceding the win to Nials by just 3 points. Severn managed to hang on for third overall fending off a late surging Bailey Williams in fourth.

Anyone of three riders had the potential to take the win in the BW auto class with Ben Casey, Jayden Jones & Reuban Alway fighting hard throughout the day. Casey was the first to strike bagging the opening race win ahead of Always and Jones. Second time round and it was a different rider at the helm, this time it was Jones pushing on at the front with Always hot on his tail. Both riders were capitalizing on a massive crash for Casey on the fastest hill on the circuit. A crash that would see him settle for third in the second race. A remarkable placing after an accident that would rule many riders out for the day. Final time out the gate and it was Alway who took to the front taking a third holeshot for the day and setting a pace that would take him to the flag, clinching the final race win and the overall just 2 points clear of Casey in second after taking the runner up spot in the last moto. Rounding off the podium was Rylee Francie whose final race finish of third was enough to top the scales in his favour, stealing the final podium spot from Mckenzie Gordon-Smith.

In the 85cc group it was all about Ben Kennedy and Ben Harrison. The pair fought tooth and nail for the win every time out with Kennedy just having the edge. Race two saw Harrisons challenge for the overall suffer a major blow as an early race mistake gave him a lot of work to do chasing down Kennedy. At the close of play it was Kennedy with the overall, Harrison in second and Cory Flynn in third. In the SW section of the field it was business as normal with Arai Elcock continuing his recent run of good form with two more race wins and the overall. Taking second was Brody Salt just 5 point s clear of Joshua Fletcher in third.

The adult A class riders proved once again why they are the top class on the programme setting a mind blowing pace throughout the day. Howard Wainwright was stepping up to the premier class looking to test his race pace against the adults after a successful youth campaign in 2016. Race one saw drama from the start with Corey Hockey crashing out, wrapping his bike in the chestnut fencing and losing a tonne of time. With Hockey crashing out Luke Houghton stepped up his game to take the opening race win, setting himself up nicely for the overall results. Wainwrights first race wasn’t simple either as he had to battle through after a slow start. On the last lap he took the lead but a slip on the Polesworth pebbles dropped him to third. Hockey came out rejuvenated and fired up for race two, hungry for a win. Wainwright wouldn’t make it easy chasing down Hockey until the flag where Hockey staked his claim for the overall. The final race of the day saw Wainwrigth come on strong to take the win and wrap up the overall. Hockey would manage to hang onto second overall with his first race crashing proving pivotal for his placing. The final step on the podium went to a fading Houghton who managed to fend off a challenge from Jordan Wills late in the day.

Declan Hunter was a powerful force in the Rookies taking a pair of wins on his way to the overall. Hunter didn’t have it easy though having to find a way past Jamie Osbourne in every race with the pair having their best battle in the second race where Osbourne would eventually come out on top. Kyde Marlow managed to hang on to a podium spot after a brilliant start to his day with a second in the first moto. Scott Davidson was unlucky to miss out on a place in the top 3 riding consistently fast throughout the day, taking 3 fourth place finishes.

The Adult C group was a busy field once again with few new faces joining the championship. Taking the overall in the class was Joe Livingstone with a pair of wins, showing good speed throughout the day. Charlie Slater hung onto second overall making his opening race win count in the final points haul. Third overall went the way of Wilden regular Casey Buckley, who would be happy to get back on the podium after a disappointing meeting at Hilton. Just missing out on third overall was Jason Ross whose second place in the final race was almost enough to tip the balance his way.

Bradley Walding was a commanding force in the Adult B taking the opening two race wins on his way to the overall. Just four points shy of Walding was Jamie Park in second overall after an up and down day that saw him end on a win in the final moto. Nadiya Jones had another strong ride for third overall on count back just fending off fellow female rider Tanisha Thomas.

The 65cc class saw wealth of talent lining the gates. When the flag fell on race one it was Keelan Hope who took the win, kicking his day into life in the best way possible. Following on from the success of race one, Hope took a further two race wins and the overall. Dominating the class. Taking second overall was Jack Dando just hanging on in front of Leo Skinner in third. Ethan Lochrie was the man on top in the novice 65cc taking a pair of wins to fend of Grant Robinson in second. Malachi Stock came on strong at the end of the day taking the final race win but a fourth and third in the prior races saw him settle for third overall.

Read More From Joe
Previous Next