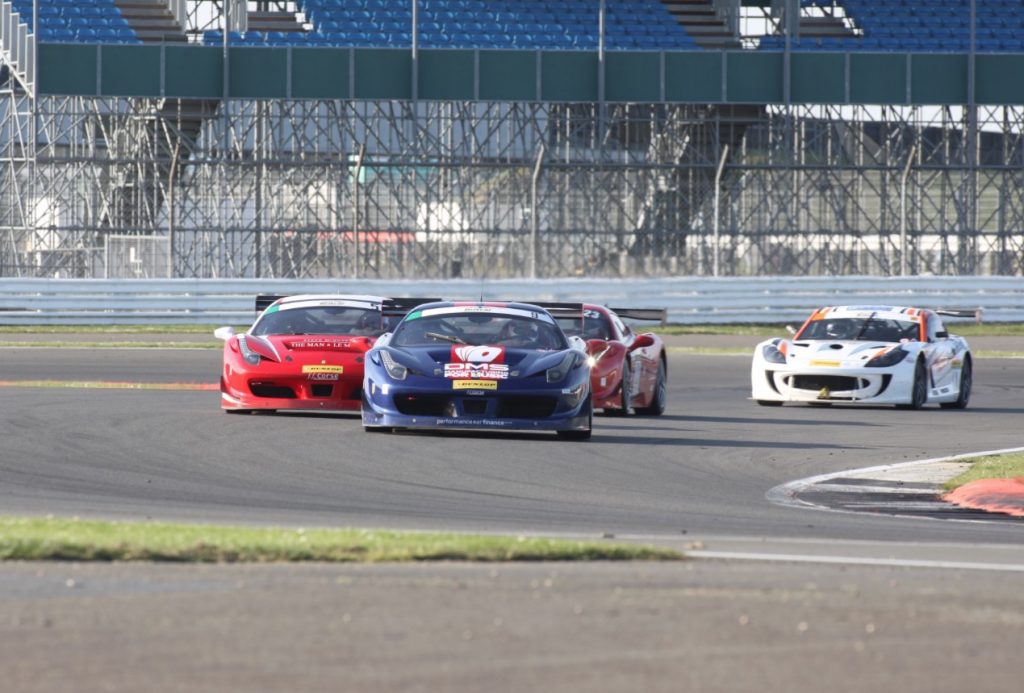 A magnificent 33-car grid was aided and abetted by ff Corse and Team Hard, with Anthony Cheshire and Tony Gilham’s squads bringing six Ferrari 458s and four Ginetta G55s respectively, and these two teams dominated the results, though, it must be said, didn’t have it all their own way in the races.

The opening round was a joint 50-minute race for Endurance and Sprint contenders on an equal footing, more a sprint for the Endurance runners in reality too. The new pairing of former F2 and Carrera Cup frontrunner Dino Zamparelli and veteran Mike Wilds took overall victory in the Class 2 DMS Motorsport with FF Corse Ferrari 458 Challenge; Wilds had put his lack of qualifying pace down to an unfamiliar set up, but was never out of the running in his opening stint, leaving Zamparelli to make a storming late-race charge from a good position. It was pole sitter Javier Morcillo’s Mosler that streaked away into an initial lead, though. The usual Morcillo and Lockie pole shoot-out in qualifying had been disturbed by new kid on the block Ross Wylie, who placed Witt Gamski’s Ferrari 458GTE between them on the grid. Lockie ran in second place in the Ferrari 458 GT3 early on, whilst Gamski, taking the opening stint, held on within the top 10. Adam Wilcox, sharing Nigel Hudson’s newly-acquired Aston Martin Vantage GT3, never lost touch with the leading pair, and in the second half of the race, when Cintrano was installed in the Mosler, and David Mason had taken over the Ferrari from Lockie, it looked like perhaps the Aston could nick the win, but the Ferraris with their pro-drivers came into play, though Cintrano drove a great race to maintain second place, Wylie brought Gamski’s car home third and the legendary Johnny Mowlem capitalised on Bonamy Grimes’ opening stint, his Ferrari  beating the Aston to fourth overall, with Mason sixth.

There would be many winners in this race – five classes, each with an Endurance and Sprint contingent; wily Scot Lockie had ensured a successful campaign by registering the #7 Ferrari for both counters, and he and Mason’s sixth overall, fourth in Class 1 translated to a Sprint overall and class win, ahead of Kevin Riley’s Mosler in the class stakes, though the true hero here must be teenage sensation Eddie Moore, who by dint of the typical Moore family traits of talent and determination, bested the Sprint runners by a long way, and the other Ginettas, in his Class 4 G50 coming home an impressive seventh overall, amongst the Endurance cars, and beating Paul Calladine’s similar machine in the class stakes.

Some late class changes saw the Brough/Hollings and DeMeeus/Stanley Ferrari 458s step-up to Endurance and step-down to Class 3; Marc and Charlie took Class 3 honours, while Laurent and Jamie endured severe gearbox issues and finished 10 laps adrift. The real battle in Class 3, though, was between the Cunningham’s Porsche 997 Team Hard Ginetta G55s though. Mark Cunningham had served notice of intent in qualifying, and led the class in the early stages, with the Team Hard cars hunting as a pack, interspersed with youngster Moore joining in, but as the race wore on, they swamped the Cunningham car, before engaging in some internecine rivalry which resulted in some cosmetic damage; Simon Rudd/Tom Barley came out best, followed by Darron Lewis/Tom Knight, and the Cunninghams.

A mid-race clash between Rob Young’s Porsche 911 and Rick Nevinson’s Cayman at Abbey saw the 911 retire and the Cayman pitting for attention, and both Mike Moss BMWs – the M3 and IM, populated by Moss himself and a number of last-minute call-ups – had woes which saw them retire before the end. Also not finishing were Leyton Clarke/Graham Lucking, their Ferrari 458 suffering clutch problems.

In other Class results – Clint Bardwell assisted Sam Alpass in the Geoff Steel-run BMW M3 to the Class 4 Endurance win, with stablemates Rob Hudson/Adriano Medeiros following them home despite enduring clutch problems in the Eureka M3, while the Woodard Mini Cooper had it’s issues too, though this didn’t stop Daniel Woodard and Davie Birrell grasping the Class 5 Endurance trophy. Class 3 Sprint went to Neil Garnham’s BMW E92, ahead of the Fothergill/Benett Porsche 997, and Class 5 Sprint was hotly contested, late entry Marcus Vivian in his little Ginetta G40 finishing a lap ahead of the  Rob Baker/Jonathan Swan Smart 4/4, and newcomers Roland Hopkins/Matthew Sleigh VW Golf. A big shout-out, too, for Jonny MacGregor; he missed but qualifying due to noise-test issues with the Taranis, but carved through the field, before being stymied by niggles, putting him out of contention.

So, a bumper grid, and mixed fortunes. But would it be a good indicator of what is to come in the later two-hour race?

Next meeting is at Snetterton on Saturday 6th May.

Read More From James
Previous Next