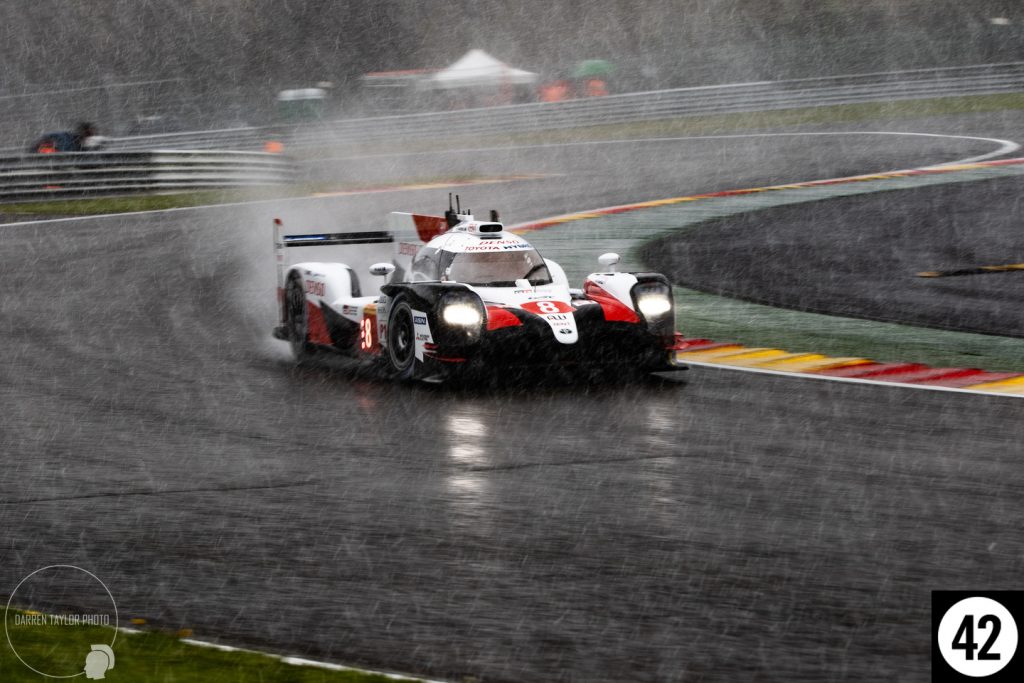 The 7th round of the  2018-19 FIA WEC Super Season returned to Belgium where it began as the penultimate race of the championship was held at the Circuit de Spa-Franchorchamps from 2-4 May with Toyota Gazoo Racing’s lone pair of TS050 Hybrids in the LMP1 Hybrid category not looking under threat from the rest of the field. The factory team could secure the LMP1 World Championship with either car taking victory at the 6 Hours of Spa. The GTE championship could also be clinched by Porsche as a manufacturer ahead of Le Mans the following month.

Mike Conway and Kamui Kobayashi put the #7 on pole position with a 1’53.747 average lap time in qualifying, almost half a second clear of the #8 sister car’s 1’54.243 average set by Sebastien Buemi and Kazuki Nakajima, the latter pair of whom were all but denied setting a faster time due to a red flag in the closing minutes due to a ByKolles stoppage on track. Best of the rest was SMP Racing’s Sergey Sirotkin and Egor Orudzhev taking the third qualifying spot in the #17 BR Engineering almost a second off the lead in LMP1. G-Drive Racing would set the fastest LMP2 time with the pairing of Jean-Eric Vergne and Job van Uitert in the #26 car while Andy Priaulx and Harry Tincknell of Ford Chip Ganassi Racing would take snatch the honours of the fastest GTE Pro qualifier, just pipping Alex Lynn and Maxime Martin of Aston Martin Racing by under 0.07 seconds in the closing stages. The #90 TF Sport Aston Martin Vantage driven by Charlie Eastwood and Salih Yoluc would lead the GTE Am class on Saturday.

Spa’s notoriety for its microclimate was affirmed shortly after the start of the 6 Hours of Spa. While the race started under bright and dry conditions, snow was forecast for the race, which hit the circuit just 10 minutes in with more showers to follow in the race, switching between rain, hail and sunshine throughout the race.

In the LMP1 category, the #7 Toyota was able to gain significant ground early on and benefit from its sister car losing pace from being on rain tyres when slick tyres were the faster compound in the second hour of the race. However, this lead was to be dashed by a technical gremlin as Kobayashi, driving the #7 Toyota at the time, was hit by a brake sensor failure just shy of half way through the race and was forced to effect repairs in the team garage. This proved decisive aas the stoppage cost the driver trio 11 minutes, putting them four laps down on the #8 Toyota’s lead and elevating the privateer LMP1 teams or SMP Racing and Rebellion Racing into contention for a podium finish. Despite the #11 BR Engineering driven by Mikhail Aleshin, Vitaly Petrov and Stoffel Vandoorne running strongly in second place, particularly as the team strategy reacted best to varying weather conditions, a safety car period nullfied this lead, which would help Rebellion Racing significantly as Thomas Laurent in the #3 car would pass Petrov for second place after the restart. Both contenders’s sister cars had dramas of their own as SMP Racing’s #17 BR Engineering lost a wheel in the third hour of the race, losing a lap, whilst the #1 Rebellion had a spin while being driven by Bruno Senna, dropping to fifth place. Oliver Webb suffered a heavy crash in the #4 ByKolles following a tangle with Jordan King’s #37 Jackie Chan DC Racing at La Source hairpin. Though Webb was able to bring the car back to the garage the repair the substantial front damage to the car, this put the car 38 laps down on the lead. The #8 Toyota was all but unchallenged since the turn of the second half of the race and won the race by a lap with Fernando Alonso driving the anchor leg after the race was red-flagged and declared with 11 minutes to go due to the return of another snow shower. The victory handed Toyota its first LMP1 World Championship since 2014, when it had been known as the World Manufacturers’ Championship. Due to the #7 car’s 6th place finish, the Conway/Kobayashi/Lopez driver trio trails Buemi/Nakajima/Alonso by 31 points with only 39 points remaining in the championship.

LMP2 saw Dragonspeed take its first WEC victory in its class following a closely fought battle between the #31 car driven by Roberto Gonzalez, Pastor Maldonado and Anthony Davidson, G-Drive Racing’s #26 car piloted by Roman Rusinov, Job van Uitert and Jean-Eric Vergne as well as Signatech Alpine’s #36 car where Nicolas Lapierre, Andre Negrao and Pierre Thiriet were at the wheel. Though a safety car had destroyed a strong lead Maldonado had built up ahead of his LMP2 competitors, the Venezuelan was able to keep the two challengers at a safe distance after the last restart until he and his teammates claimed an early victory due to the red flag.

The GTE Pro saw fierce competition though Alex Lynn and Maxime Martin in the #97 Aston Martin Vantage GTE win their class, thus taking the British marque’s second class victory of the super season as varying tyre strategies across the teams saw gains and losses alike throughout the course of the race. While the weather was unpredictable at Spa, BMW likely cost itself a podium finish with late pit stops helping the #51 AF Corse Ferrari 488 of James Calado and Alessandro Pier Guidi pass toward the end of the race to claim second place in the class. A third-place finish for Kevin Estre and Michael Christensen in the #92 Porsche 911 RSR put them in good stead to claim the drivers’ title in the class – their third place came by virtue of sister car #91 piloted by Gianamaria Bruni and Richard Lietz being given a time penalty for a collision with the #54 Spirit of Race Ferrari. The result was sufficient for Porsche to claim the World GT Manufacturers’ Championship, ending the two-year spell for which Ferrari won the championship.

In GTE Am, the polesitting #90 TF Sport Aston Martin was unable to convert its fastest qualifying time into a class win as the Yoluc/Hankey/Eastwood trio was dropped to second place by Christian Ried, Riccardo Pera and Matt Campbell in the #77 Proton Dempsey Racing Porche 911 RSR, who took victory in their class by 5.3 seconds.

Remarkably, in spite of a consensus from experienced and less experienced drivers that the unpredictable and ever-changing weather conditions made for an exceptionally challenging race, all 34 starting cars were still running after the red flag was issued at the end of the 5 hour, 49 minute race in the Ardennes Forest.

Read More From Darren
Previous Next