The Mini Festival Returned to Brands Hatch over the weekend (20-21/07/2019) for a two day celebration, celebrating 60 years of the worlds favourite small car.

Mini Challenge JCW (Race 1) A 28 car grid lined up on the start line ensuring plenty of action throughout the pack. James Gornall took the first Mini Challenge JCW win of the weekend with pole man Dan Zelos finishing a close 2nd, just 0.313 of a second behind. Ben Palmer starting from the outside of the first row took an early lead at Paddock Hill Bend with Gornall and Zelos slotting in behind. Four laps latter Palmer took a trip across the grass at Surtees damaging the cars front splitter but maintained the race lead until lap 13. Struggling with the cars handling Gornall and Zelos flew past relegating Palmer into 3rd. Nathan Harrison and Lewis Brown were next to past the ever struggling Palmer who would finish down in 5th.

Mini Challenge JCW (Race 2) Nathan Harrison, from 3rd on the grid, secured the top step of the podium taking the chequered flag with a convincing win over James Gornall. From the first row Gornall and Zelos from the off fought for position all the way to Druids. Contact between the two delayed both allowing Harrison to fly past to take the race lead. A short safety car period on laps 9 & 10 to remove James Griffith car from Surtees hampered Harrison race but he managed to hold on to the lead at the restart taking the flag 2.775s ahead of Gornall. Dan Zelos crossed the line in 3rd place.

Mini Challenge JCW (Race 3) Ben Palmer took the final top podium position of the JCW weekend with a lights to chequered flag victory. Palmer got of to a flying start from the second row taking the race lead from reverse grid pole sitter Rory Cuff into Paddock Hill Bend. Cuff took the fight to Palmer during the opening laps with Gornall and Zelos close behind. Cuff would finish 2nd 2.502s behind Palmer, 3rd place going to Dan Zelos. 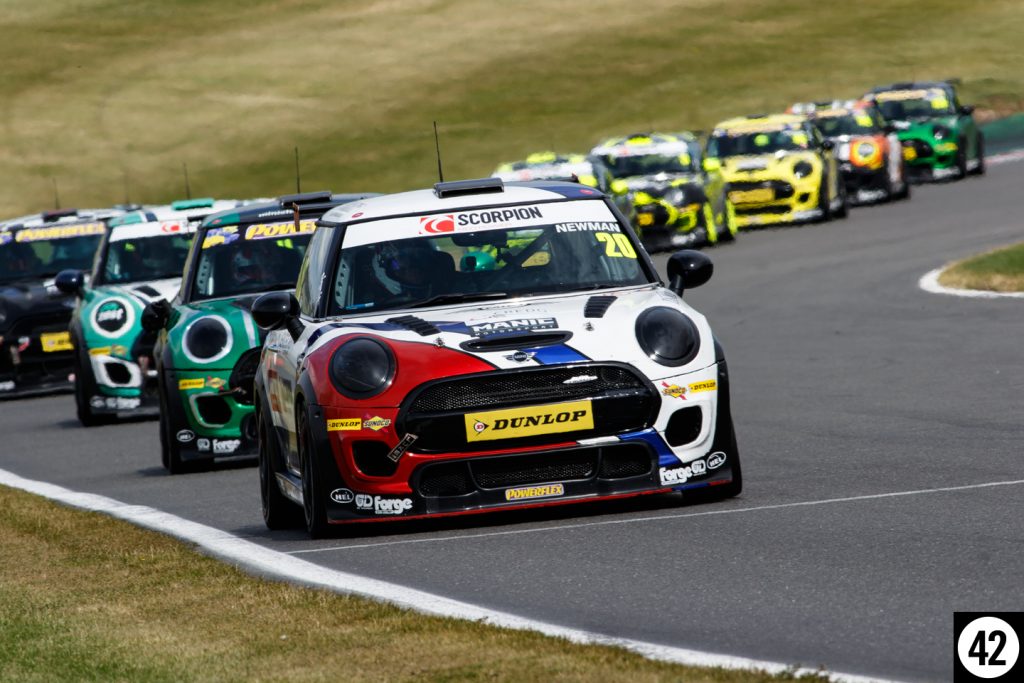 Mini Challenge Cooper S (Race 1) Rob Austin took an early lead and held position until the forth lap when Daniel Butcher-Lord took the position and remained out in front for the duration of the race. Sami Bowler in the 666 Cooper S made her move on the same lap to take 3rd from Stuart McLaren. Bowler held on to 3rd until lap 12 when McLaren re-took the position taking the flag a massive twelve seconds behind the 2nd placed Austin.

Mini Challenge Cooper S (Race 2) Daniel Butcher-Lord got a great start of the line as did Sami Bowler from forth position sticking to Butcher-Lords exhaust pipes. The pressure from Austin later in the race proving to much, Bowler would lose her position by lap 13 and then lose 3rd place to Stuart McLaren on the 14th relegating her down to 4th place.

Mini Challenge Cooper S (Race 3) Reverse grid race and Alan Lee on pole with Keir McConomy alongside. Sami Bowler got the jump on McConomy and a lap later she would take the lead from Lee only to lose the lead herself to McLaren by the 3rd lap. McLaren would lose out to Butcher -Lord by the 7th lap with Butcher-Lord remaining out in front until the flag. Rob Austin stole 2nd place from McLaren on lap 11 leaving Mclaren with another 3rd place finish.

Mini Challenge Cooper Am & Cooper Pro (Race 1) Toby Goodman, Robbie Dalgleish and Lydia Walmsley all got away cleanly in the Cooper Pro Class, and it would remain that way to the flag. The safety car was called into action on lap 5 and remained in control of the race until lap 11 for the clearing up of Andy Ringland car which left the circuit at Paddock, leaving a 2 lap dash to the line. In the Cooper Am Class Lee Pearce took the class victory followed by Josh Porter and Lawrence Harris.

Mini Challenge Cooper Am & Cooper Pro (Race 2) Toby Goodman took the lead of the Pro Class at the start but would lose out to Robbie Dalgleish on lap 3. Martin Poole brought his Mini Cooper home in 3rd. In the Cooper Am Class Lee Pearce would maintain his dominance with another win. Josh Porter and Josh Martin would complete the podium.

Mini Challenge Cooper Am & Cooper Pro  (Race 3) The reverse grid race, Dominic Wheatley led from pole position for 3 laps but soon succumb to pressure from Toby Goodman. Martin Poole and Robbie Dalgleish would complete the podium. Lee Pearce completed his weekend with a hat trick of wins in the Cooper Am Class. Josh Porter and Josh Martin once again finished 2nd & 3rd. 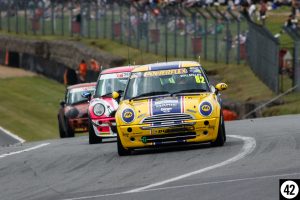 Dunlop Mini Se7en Championship The weekends first outing Darren Thomas was victorious beating Joe Thompson to the line with a gap of only 0.661s. Andrew Deviny sprinted over the line to take 3rd. Jeff Smith taking top honours in the second of the weekends races crossing the line 0.177s ahead of Joe Thompson. Darren Thomas again finished on the podium with a 3rd place. 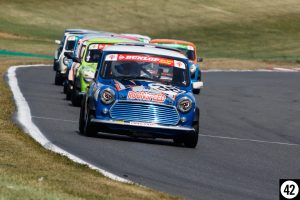 Read More From Gary
Previous Next